After reading about LoRa spread spectrum technology and getting my own general vision on how it works ( LoRa and others ) I’ve purchased couple of HopeRF RFM98W modules to check their performance. I’ve expected double range for ~5 kbps and up to 8 times for the rates of ~100 bps.

I’ve realized that performance is well below that was declared in HopeRf specs and manual  and checked it with several tests.

Most of the data I was able to find are related to the communication range. This is good to know, but far away from real numbers. We all know that range of RF communication may change within few orders of magnitude even at fixed power of the transmitter. The only true tests are when 2 devices are tested side by side at exactly same conditions.

Both RFM22B and RFM98W based beacons/receivers were built about the same way: RFM modules were glued to the back side of Arduino Pro Mini. RFM22B beacon and handheld finder are described in more details on RC Finder Beacon: Digital vs Analog page. Both antennas were checked with handheld receiver (beacon finder) and show about the same sensitivity.

Goal: find out the range and the threshold of both FSK and LoRa modules

RFM22B beacon is built-in in the Mavic Pro (see previous post). RFM98W beacon is inserted into the box attached to the Mavic’s legs. From previous testing I’ve realized that both methods of the beacon’s placement have about the same sensitivity. Both RFM modules are set to about the same frequency and about the same transmission speed. They transmit 9 byte signal (CRC check is ON) every 1 sec and both have the same preamble length.

I was able to get 4100 m range and turned back home because Mavic’s video link was about to its limit. All the time both modules show about the same dBm numbers and none of them had distinguished range limit (except of few packets drops of the RFM22B module at the end of the range). RFM98W had no packet lost. 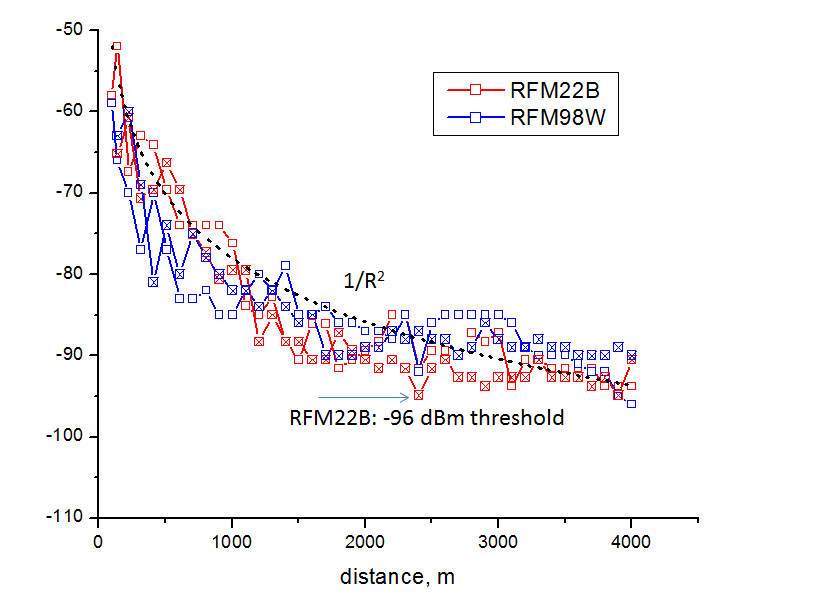 The minimal value of RSSI before packet lost was -96 dBm. In case of RFM22B RSSI in dBm can be calculated from number shown on LCD as 1.1*NUM-112.5 (this includes both my own scaling at the receiver and RSSI to dBm conversion from RFM22 manual). In case of RFM98W RSSI (dBm) shown on LCD is given as (137-register(0x1A)) (top value); (137-register(0x1B)) (middle) and register(0x19) (bottom). As per manual 0x1A contains RSSI of the received packet; 0x1B is a noise and SNR is a difference between them. (SNR can show high values, this is nothing but wrongly defined uint in my code. If someone wants to know real number, do 255 – thatvalue to get negative SNR)

Important: we calculate RFM98W RSSI as it described in HopeRF manual, there are other versions of Semtech SX127x manuals with different definitions of these values (see discussion below).

We did not achieve our goal, because 4200 m was not enough to determine the range and the threshold in both cases. But we learned the following:

a) RSSI reading is about the same for both modules. So both rfm22 and rfm98 beacons/receiver pairs are properly done, there are no mistakes in electronics, antenna, or code.

b) RFM22B sensitivity limit is ~ -96 dBm, this value coincides with the value obtained in my previous tests.

Goal: find out the threshold of RFM98 LoRa modules

Since we know already threshold of RFM22, I did the test to have the same number for RFM98.

I’ve inserted a screen made of carton wrapped with Aluminum foil to reduce RSSI in about 20 dBm. All other settings were the same to Test 1.

The above test were performed at the conditions of powerful EM noise (from Mavic’s transmitters and electronics). Without that noise, rural surrounding practically does not have EM noises at all. All WiFi sources were off.

To reduce signal from the beacon (and have test range within hundred of meters), the beacon was placed into 2 metal cans, and those cans were then put into microwave oven. Can’s double walls reduce signal from -25 dBm to -64 dBm and total signal at the closed door of microwave oven was -80 dBm. Walking from- and to- the house the sensitivity limit was determined as -98 dBm — -100 dBm. From my previous experiments with RFM22B at about same conditions the limit of RFM22B was determined as – 96 dBm.

a) In a noiseless environment both RFM98 (LoRa) and RFM22B (FSK) sensitivity limits are about the same and are around -95 – -100 dBm. These values are closed to the values obtained in Test 1 and Test 2.

According to LoRa manual, limit of sensitivity gets significantly better with SF (spread factor) increase. Here is what  LoRa calculator  shows:

a) Default (used in our previous tests):

For both settings, the beacon was inserted in a doubled can and in the microwave oven similar to test 3 and I walked to- and from- the house trying to detect range of sensitivity and RSSI values. I did not find any significant difference at all. Signal disappears at about the same distance and at about the same RSSI of -96 – -100 dBm

This is a text widget, which allows you to add text or HTML to your sidebar. You can use them to display text, links, images, HTML, or a combination of these. Edit them in the Widget section of the Customizer.